Without the Transport Sector, the Paris Agreement’s Goal Is Out of Reach 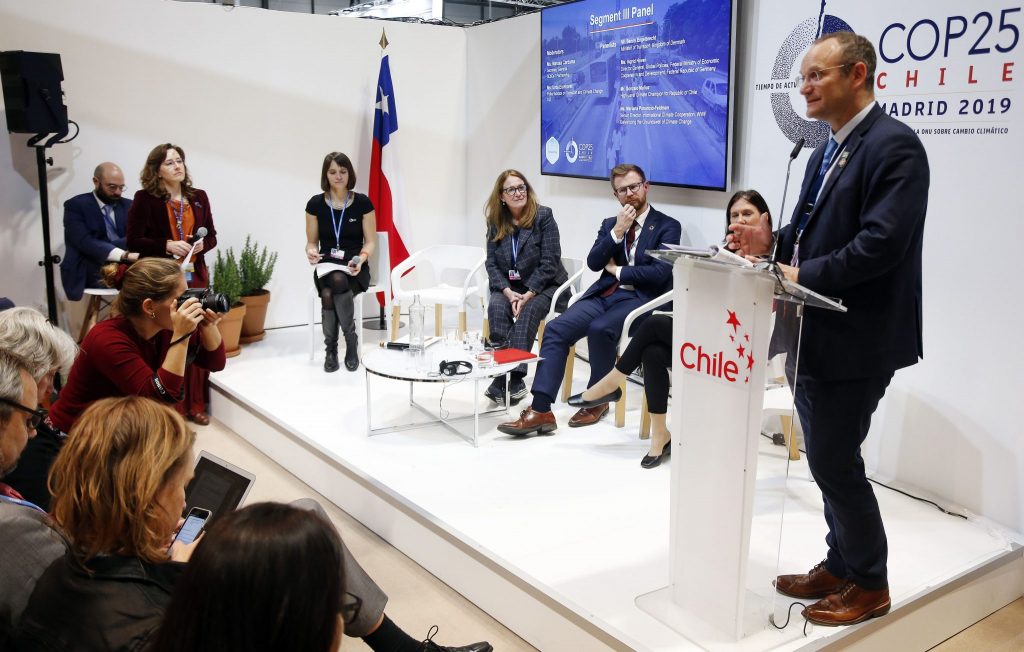 In order to stay in line with the climate target of 1.5°C we need to ramp up ambition more than fivefold over current levels. For that, the transport sector plays an important role: Currently, it contributes roughly one quarter of global energy related greenhouse gas emissions and it is the fastest growing emissions sector. Without rapid and ambitious mitigation action, transport emissions could more than double by 2050.

Since in 2020 NDCs will be updated or renewed, right now is a crucial moment for enhancing NDC ambition overall, particularly through heightened transport sector contributions. For a glimpse on a GIZ study giving recommendations on how to scale up ambition in the transport sector and scheduled for distribution by early 2020, read here.

How can we achieve more ambitious NDCs in the transport sector?

Due to its relevance for climate action, the Chilean COP25 Presidency decided to make transport one of its key pillars. The full morning of December 6 was devoted to Transport Day – an event that encompassed inspiring speeches by high-level participants such as the Chilean High Level Climate Champion Mr. Gonzalo Muñoz as well as  panel discussions and break out group sessions on how to increase climate ambition and implement actions in the transport sector.

A video recording is available here.

In his opening speech, Mr. Muñoz, highlighted the importance of the transport sector for climate change and emphasized the need for a just transformation of the sector. He was followed by Mr. José Luis Ábalos, Spanish Minister of Transport and Public Works, who presented measures taken by the Spanish government to reduce emissions from the transport sector by 37% by 2030. Chilean Vice Minister of Transport Mr. José Luis Domínguez used the Chilean example to show how to overcome four barriers (technical, financial, legislative, no additional subsidies) that can impede the largescale roll-out of electromobility. He thanked the German Ministry of Environment (BMU) for their support and announced that the Ministry and GIZ will cooperate further on the issue of financing electric mobility in Chile.

The panel discussion that followed examined vision and ambition necessary to close the mitigation gap in transport. Panelists included:

All panelists agreed on the importance of cities in decarbonizing transport. Access to funding is one major issue faced by cities and the preparation of bankable projects necessitates a lot of capacity that is sometimes lacking. Overall, panelists called for a systemic transformation of the transport agenda and a mix of approaches to achieve enhanced mitigation ambition. The importance of behavioral and regulatory measures as well as sectorial agreements in order to implement specific transport targets in the new NDCs were highlighted  – an accomplishment already achieved in the new Costa Rican NDC as stated by Ms. Meza.

“It was already difficult to decarbonise the energy sector, it will be even more difficult in transport”

Mr. McDowell, representing the EIB that recently announced its withdrawal from financing fossil energy, explained that adaptation and resilience play a big role in transport investments, and that decarbonization of the transport sector will be the next sector to tackle for the bank. It was important to replicate lessons learnt in the energy sector, for example the engagement of member states together with experts and civil society. He indicated that in addition to divest fossil fuel projects from 2022 onwards, EIB will allocate one trillion euros in the next decade to projects that contribute to reducing climate change.

After the panel session, representatives from SLoCaT’s Young Leaders in Sustainable Transport Programme surprised us with answers to tricky questions such as “What is the largest contributor to increases in global transport CO2 emissions in this decade?”. It is not aviation nor trucks or shipping, but emissions from SUVs that outweigh all efficiency benefits that new vehicles offer!

The second panel touched upon barriers for implementation and the upscaling of low carbon, resilient and sustainable transport. It was moderated by Mr. Sasank Vemuri from the MobiliseYourCity Partnership and panelists were: 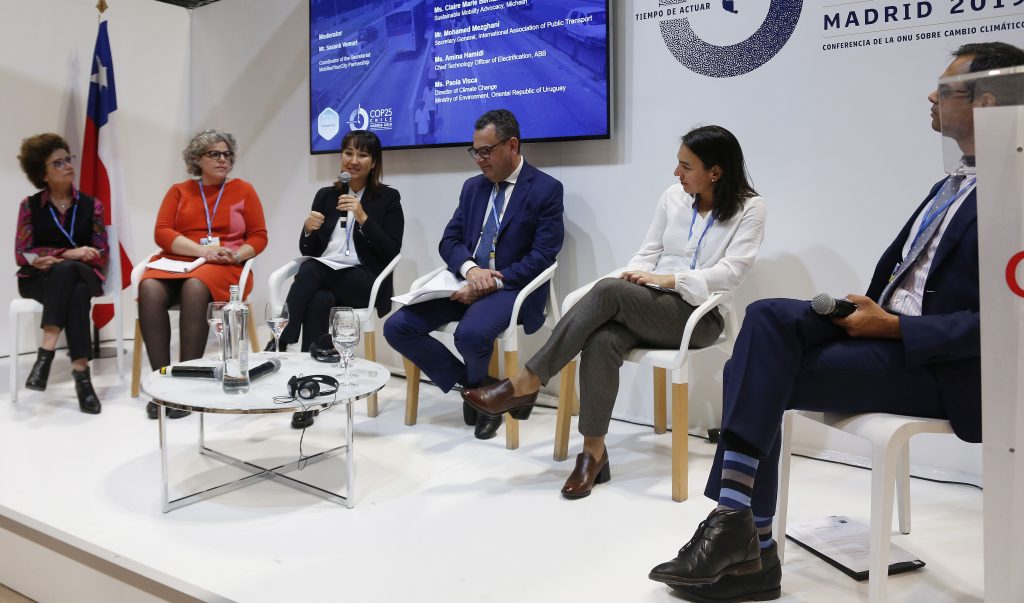 Several panelists described difficulties arising from different levels of authority and competency. For example, in Uruguay the national Government sometimes has limited influence on transport policies at the local level. This was reinforced by Mr. Mezghani who highlighted challenges in the design of transport policies arrising from the involvement of many different authorities on local, regional, national and at times supra-national level. Capacity building and awareness raising is crucial to enable the design of effective transport policies on all levels. Moreover, he mentioned that it is important to involve transport ministers in climate change discussions because they will ultimately implement public transport and other mobility measures.

“Ministers should be part of the transformative conversation”

Cooperation and involvement was also an issue raised by Ms. Adib from REN21, who highlighted the lack of cross-sectoral cooperation between the transport and the energy sector. The share of renewable energy in the transport sector is only 3%! Increased political will and the right regulatory and political frameworks are pivotal to create markets that help use transport as a leverage for increased shares of renewable energy.

Sector coupling was also emphasized by Ms. Hamidi from ABB who presented ABB’s work on e-mobility and the integration of different modes in order to overcome barriers to e-mobility. In her opinion, cost and convenience are two main barriers for a wider adoption of sustainable transport. To unlock these barriers, ABB designed fast chargers that can fully charge a car with a range of 200km in only 8 minutes. However, charging infrastructure is lacking – 80% of charging stations are installed at home, 15% at work and the rest is provided in public places. To tackle these barriers, she calls for government intervention and regulatory measures.

In world café style discussions, participants then had the opportunity to discuss policy frameworks, technological barriers and financing issues. Participants pointed out that it is crucial to broaden our way of thinking about transport: We need to consider other modes of transportation beyond passenger transport, we have to include adaptation in the discussion, and finally, we need to think about transport as an integrated system. For example, we need to plan cities in a way that turns green public transportation into the most efficient way of moving around.

“We want to talk about solutions as well”

The last panel focused on the way forward to COP26 and was moderated by Urda Eichhorst from Moving Chile and Maruxa Cardama from SLoCaT with participation of:

Panelists agreed with Ms. Hoven who stated that we are at an extremely important entry point for the transport sector to be visible and to bring in the potential that lies within the sector to make a significant contribution to achieve more ambitious climate targets. Also, she warned that transport can either exacerbate, or relieve inequality.

We need to not only think about one transport system but about mobility as a whole. Ms. Hoven accentuated that a climate-friendly city is an integrated, people-centered city. This was taken up by Denmark’s Minister of Transport Mr. Engelbrecht who focused on cities’ opportunities to provide safe spaces for citizen to move around on bikes and by walking. Making biking a safe way to travel is a pre-condition for promoting this zero-carbon mode of transport.

According to Ms. Panuncio-Feldman from WWF, functional collaboration between governance levels, sectors and public and non-public players is key to accelerating implementation and aligning measures, thereby invigorating remarks by other speakers that had stressed the need for collaboration and stakeholder engagement on all levels.

With a look to the future, Denmark is currently evaluating the potential of liquid fuels from wind energy for the aviation sector. The German Ministry of Economic Cooperation and Development will continuously support developing countries’ transport sectors, bilaterally, through partnerships and functional collaboration on all levels. The Ministry is keen to keep transport on the international climate agenda.

In 2020, NDCs need to be designed in a collective and collaborative effort, according to Ms. Panuncio-Feldman.

Following Ms. Panuncio-Feldman’s appeal to further promote the Marrakesh Partnership for Global Climate Action, Mr. Muñoz in his closing speech emphasized the major opportunity this tool represents for the fulfilment of the Paris Agreement and the increase of ambition.

As Transport Day has shown, we know what to do, we have the necessary tools, and now, we need to enhance climate ambition in NDCs and turn to implementation!

The event, co-organised by BMU funded project Moving Chile together with SLoCaT on behalf of the Paris Process on Mobility and Climate (PPMC), took place on December 6 from 08:30 to 13:30 at the Chilean Pavilion.

The event programme is available here.