India is witnessing an increase in Electric vehicles (EV) adoption fueled by the Government of India’s commitments on climate change commitments as well as its vision of decarbonizing the transport sector. This would lead to a substantial demand for batteries for traction applications. In addition to the demand of batteries, the technology landscape of battery chemistries is fast evolving. Innovative businesses such as battery swapping are receiving an added thrust from new market entrants and the government.
Lithium-ion, the go-to chemistry for EV batteries in India and worldwide, requires a set of minerals which aren’t abundant in India. Such a condition leads to high import dependency. It is hence important to promote circularity of batteries to reduce supply chain dependencies and recycle the battery materials to put them back as inputs for battery manufacturing. Detailed study of the technologies, standards, policy & regulatory landscape, manufacturing, swapping, disposal, recycling, and reuse of batteries has been carried in this study to understand the value chain components.

Under the NDC-TIA India component, the project “Battery Ecosystem: A Global Overview, Gap Analysis in Indian context, and Way Forward for Ecosystem Development” is carried out by Deloitte Touche Tohmatsu India LLP. he NDC Transport Initiative for Asia (NDC-TIA) is part of the International Climate Initiative (IKI). The Federal Ministry for the Environment, Nature Conservation, Nuclear Safety and Consumer Protection (BMUV) supports the initiative based on a decision adopted by the German Bundestag. 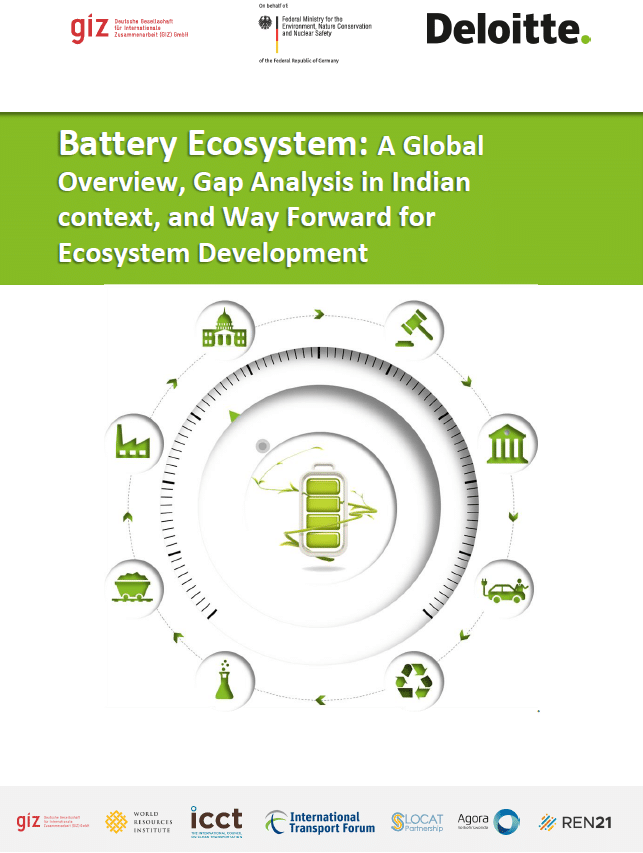